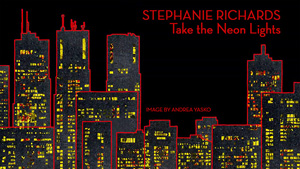 “For myself, tone color, texture and ‘unique sounds’ (growls, double buzzes etc.) …can be every bit as musical as harmonic expression can be, and ultimately I hope to meld [them] together hand and hand.” – Stephanie Richards

Trumpeter Stephanie Richards has performed and/or recorded with such luminaries as Henry Threadgill, John Zorn, Anthony Braxton, Butch Morris, and the Pixies. With her acclaimed debut solo album in 2018 Fullmoon, Richards announced her intention to expand the boundaries of contemporary jazz, and demonstrated the skills to do so. For her 2019 release Take the Neon Lights, New York City-inspired poems from cultural icons including Langston Hughes, Maya Angelou and Allen Ginsberg provide the backdrop for a sonic portrait of NYC that is equal parts dazzle and grit, like the fabled city itself.

Richards’ interest in “tone color, texture and ‘unique sounds'” is on full display as the music ebbs and surges; at times lyrical, almost plaintive, while at others times it growls and roars. Underpinning these shifting sonorities is a sense of restless exploration; each band member probes the boundaries of conventional structure and their defined roles in a jazz ensemble while maintaining a three-way dialogue with fellow musicians and the listener. This is adventurous, challenging music that resists easy categorization, but the audience’s engagement is amply rewarded.

Take the Neon Lights marks Stephanie Richards as a talent to be reckoned with. 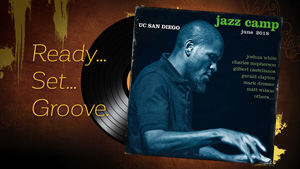 “Most of us would say that inventing meaning while letting loose is the essence and promise of jazz.”
– Robert Christgau

From its origins in the African-American community of New Orleans in the late 19th century jazz has evolved into the premiere all-American art form, and has been labeled “America’s classical music.” By the 1920’s the genre had been embraced by the mainstream to such an extent that the Twenties and Thirties were declared “the Jazz Age” by author F. Scott Fitzgerald, and European composers including Stravinsky and Ravel incorporated jazz elements into their work.

Developing from roots in country blues, ragtime, field hollers, and spirituals, jazz music is notoriously difficult to define as it embraces many subgenres, among them Dixieland, swing, bebop, hard bop, cool jazz, free jazz, Afro-Cuban, modal jazz, jazz fusion, post-bop, and Latin jazz. However varied these styles, they do share some commonalities, chief among them an emphasis on live performance and on improvisation. Classical music performance is judged by fidelity to the written score and the composer’s intentions; by contrast jazz is more often characterized by interaction and collaboration in the moment. Less value is placed on the composer’s contribution and more on the individual musician’s interpretations of melodies, harmonies, and time signatures. Whereas classical music recordings strive to capture a definitive performance of a given work, jazz recordings document just one interpretation of a piece at a particular moment in time. Because of its improvisational nature no two jazz interpretations are alike, and there are no absolutes. It’s an art form that finds its purest expression in live performance, such as in the UC San Diego Jazz Camp’s Finale Concert.

UC San Diego Jazz Camp is an annual week-long intensive workshop for students aged 14 and older. Attendees are mentored by a distinguished faculty of music professionals and educators in a variety of jazz-related topics, including theory, composition, improvisation, critical listening, technology, performance practice, and ensemble performance. Students are grouped into ensembles under the tutelage of a faculty member, and rehearse standards and original compositions for the Camp’s Finale Concert before an audience of family, friends, and jazz aficionados. In the process student musicians are introduced to that combination of group interplay and individual expression, of discipline and spontaneity, that is unique to jazz. F. Scott Fitzgerald famously called the 1920s the “Jazz Age,” and recent inventions such as radio and phonograph records helped to spread the popularity of two quintessentially American musical genres, jazz and blues, across the country and beyond our borders. In 1926 a Paris-based music magazine began its review of recorded jazz with the observation that “Jazz truly rules the world,” and a growing number of influential European composers were jazz fans, including Hindemith, Milhaud, Weill, Honegger, and Poulenc. Maurice Ravel spent several happy nights with George Gershwin at Harlem’s Savoy Ballroom listening to jazz, a testament to the music’s appeal.

For a time these foreign composers included jazz elements in some of their works, with varying degrees of success, but by the mid-1930s their ardor had cooled as new forms of modernism took hold on the Continent. It was left then to American musicians to continue nurturing the confluence of their native jazz and “serious” music that began in the early 1920s, and they did so brilliantly.

Three of the foremost practitioners of this hybrid form were George Gershwin, Duke Ellington, and Aaron Copland. Though they came from different backgrounds and training, and each developed a singular musical personality, they shared an interest in elevating the jazz/classical fusion from a novel experiment to a vibrant art form. They shared another quality, harder to quantify but nevertheless distinctive: their music was unmistakably American, with all that implies.

This characteristic is perhaps most evident in the Gershwin masterpieces on this program, “An American in Paris” and “Rhapsody in Blue.” In both pieces, the jazz/blues influences are on prominent display, as the music alternates in mood from contemplative to nostalgic to swaggering, and from Paris to Harlem. Gershwin insisted that both pieces are examples of sonata form, but whether sonata or tone poem or concerto or potpourri, it’s not important how it’s categorized. What matters is that this is fun music, as full of personality as anything you’re likely to hear.

It’s been said that Duke Ellington embodied the very soul of jazz. Ellington wrote some of the first extended jazz compositions to appear in the concert repertoire, and the two pieces on this program, “Mood Indigo” and “Solitude,” amply demonstrate his versatility and sophistication as a composer. Ellington was also an innovative, idiosyncratic orchestrator, and what became known as the “Ellington Sound” is a constant feature of his music – elusive, hard to define, harder still to imitate, but once heard, unmistakable.

Aaron Copland was a city boy who brought a certain polished urbanity to his work. After extensive studies in Paris Copland initially worked with then-voguish European styles, but gradually his native “Americanism” emerged and he established himself as the premiere American composer of his generation. “Quiet City” is a mood piece, a tone poem in miniature, originally written for a friend’s play. The play failed but the music lives on as a popular concert selection. The influence of jazz and/or blues is perhaps less overt in this haunting work than in the Gershwin and Ellington pieces, but it’s there in the tones and phrasings of the featured trumpet and oboe combined with the dotted rhythms of the string orchestra.

The program is rounded out with an exhilarating premiere work by Asher Tobin Chodos, “Concertino for Two Pianos and Orchestra.” Joining the composer on piano is Cecil Lytle, who also performs on “Mood Indigo,” “Solitude,” and “Rhapsody in Blue.” Since its inception 15 years ago, UC San Diego Jazz Camp has stayed focused on a single goal: ensuring the continued vitality of jazz music by identifying, instructing, and nurturing new talent. The camp accepts students ranging in age from 14 to adult, and from a variety of educational or vocational backgrounds. Prior to attending the camp, students attend placement auditions based upon which they are assigned to one of two proficiency levels, intermediate and advanced. Most of the camp’s instruction is designed for one of these levels.

The camp’s faculty is made up of internationally renowned musicians who are experts in a variety of jazz stylings, from be-bop to contemporary open-form. The rigorous and immersive curriculum covers a broad range of topics and techniques, including Jazz Improvisation, Listening to Jazz, Master Classes, and individual lessons. There is a particular emphasis on jazz as a performance-oriented art form through participation in small ensembles and informal jam sessions, and attendance at faculty concerts.

The week’s activities culminate in a finale concert in which all students perform as a member of an ensemble under the supervision of a faculty member. Concert sets feature an assortment of instrumental combinations and an eclectic repertoire that includes standards as well as new compositions by faculty and students. Each student gains valuable performance experience and an opportunity to shine in front of a supportive and appreciative audience. In turn, audience members have the opportunity to witness some fine young musicians at the start of their career and older musicians embarking on a new chapter.

“Jazz is restless. It won’t stay put and it never will.”
– J.J. Johnson Along with baseball and barbecue, jazz is considered one of America’s greatest cultural exports, and one of its most adaptable. Since its inception in New Orleans in the early 20th century jazz has spread around the world, drawing on different regional, national and ethnic cultures for inspiration and spawning a bewildering variety of styles: New Orleans jazz, Kansas City jazz, Gypsy jazz, Dixieland, big band, ragtime, swing, be-bop, free jazz, modal jazz, Latin Jazz, Afro-Cuban jazz, cool jazz, smooth jazz, jazz-rock, etc., etc. As a result jazz, though ubiquitous, is difficult to define; Louis Armstrong remarked, “If you have to ask what jazz is, you’ll never know.”

UC San Diego’s Jazz Camp, an annual intensive summer program inaugurated in 2003, reflects the diversity of the jazz idiom in its faculty, student body, and repertoire. Jazz musicians ages 14-adult work in a variety of styles with professional jazz artists, honing their compositional, performance and improvisational skills. The goal of the Camp is to prepare students for life as a musician through immersion in jazz history, theory, techniques and genres.

First and foremost, jazz is about live performance. The five-day workshop culminates in a free Finale Concert featuring student ensembles presenting a program of standards and new compositions under the direction of faculty musicians. Several of the Camp’s alumni have gone on to pursue studies at such prestigious institutions as Yale, Juilliard, and the Berklee College of Music, and the Finale Concert affords the public the rare opportunity to hear future jazz luminaries at the start of their career.

Browse other programs from past seasons of Jazz Camp.