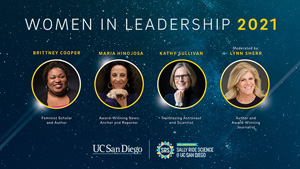 “I have always understood women to be leaders, to be creative, to be committed, to be problem-solvers, to be diplomats and to be fierce advocates for the well-being of entire communities …. I trust that things are better when women are at the table, and quite frankly, if there are no women at your table, I’m not coming,” says feminist scholar and author Brittney Cooper.

At this year’s Women in Leadership event, the virtual table was full of extraordinary women. Seated with Cooper were astronaut and scientist Kathy Sullivan, news anchor and reporter Maria Hinojosa, and author and journalist Lynn Sherr. Sharing stories of childhood dreams, career challenges, social justice and more, the panel gave insight not just into their own journeys but what they hope for the future of women and girls everywhere. Their messages are inspiring and urge all of us to look at the world through a new lens.

Pull up a chair and watch “Women in Leadership 2021” and be part of the conversation. 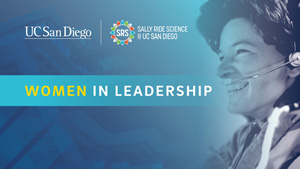 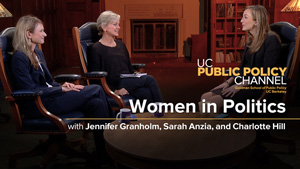 Women played a huge role in the 2018 midterms. Women voters flipped districts across the country, and female candidates won a record number of congressional seats. So, what does it mean for American politics as a whole moving forward? Former Michigan Governor Jennifer Granholm, and Goldman School of Public Policy professor Sarah Anzia sat down with graduate student Charlotte Hill to examine what happened in 2018, and what might happen in 2020.

The conversation begins with an analysis of what led to the unprecedented wins of 2018. Both Anzia and Granholm point out there was a massive increase in women running as Democrats, but the number of Republican female candidates remained about the same as years past. Granholm argues the increase is evidence women are more motivated than ever before to get involved in politics, from the Women’s March to the voting booth. She suggests the lopsided nature of that motivation is in no small part a reaction to President Trump.

The other major change the panel noticed was women changing the way they campaigned. From ads that show candidates breastfeeding, to addressing sexual assault, professor Anzia says, “women were running as women.” While it may seem like a strange observation, Granholm agrees, saying she was advised not to show her children, and was coached on keeping her voice low when she was running. Granholm calls the new acceptance of women being their authentic selves a gift. She points to millennial representatives like Alexandria Ocasio-Cortez as examples of women who have cast off restraints historically placed on women in office.

As of now, there are four women officially running for president in 2020. Granholm believes a woman will certainly be on the presidential ticket. But, will we finally see a woman in the White House? Will 2020 be another historic year for women? Only time will tell, but Anzia and Granholm have some predictions.