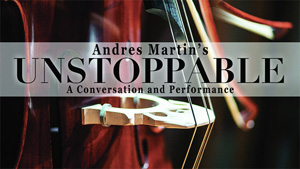 If you or someone you know is a recent college graduate or a graduate in career transition, then stop by UCTV’s newly launched CareerChannel, powered by the employment experts at UC San Diego Extension. As an unbiased provider of information, tools and experts, the channel aims to help job-seekers identify newly emerging areas of career opportunity and to develop paths and plans for necessary reskilling through research, reporting and public dialogue presented through video, radio and print. Check it out today and stay tuned for new programs about the ever-evolving career marketplace!

Don’t miss this fascinating series from UC San Diego’s Eleanor Roosevelt College examining exactly what it is that makes music,musical. Professors of music, literature and psychology decode the mysteries of music and its effect on our brains, our emotions and our lives. The series kicks off this month with renowned percussionist Steven Schick and saxophonist and educator David Borgo.

Beginning his career as an engineer at a refrigeration plant in India, Veerabhadran Ramanathan went on to make one of the most important climate change discoveries when he identified chlorofluorocarbons (CFCs) as even larger contributors to global warming than the previously identified culprit, carbon dioxide. This four-part series from UCTV’s YouTube original channel, UCTV Prime, follows the Scripps Institution of Oceanography scientist’s remarkable path that changed the face of climate change research and has introduced possibilities for human-scale solutions.

The Alzheimer’s Prevention Program: Keep Your Brain Healthy for the Rest of Your Life

CARTA: The Evolution of Human Nutrition