What does it mean to know a language? Knowing a language is a continuum. On one end, there’s explicit knowledge – knowing what words and phrases mean and using the language to communicate and talk to one another. On the other end, there’s implicit knowledge, which is typically where children begin and involves understanding what words look and sound like in a language. An example of this is when we recognize a word as “English,” but have no idea what it means.

Dr. Simon Todd, assistant professor in the Department of Linguistics at UC Santa Barbara, talks about what you can learn simply by listening. His research focuses on the incredible power of passive listening for developing and accessing knowledge about language varieties and the people that speak them.

Watch Building Linguistic Knowledge: The Surprising Amount You Can Pick Up by Listening. 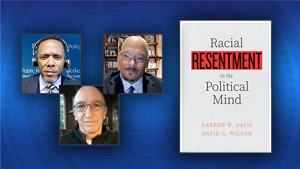 “I’m not a racist, but…” This instinct to make judgments about “deservingness” in politics often animates those who believe they are “not racist,” but tend to oppose policies and ideas that advance racial justice, and blame racial-ethnic minorities for their social, political, and economic positions.

That is one of the many arguments UC Berkeley Goldman School of Public Policy Dean David Wilson and his colleague, Notre Dame Professor of Political Science Darren Davis, explore in their new book “Racial Resentment in the Political Mind.”

Dean Wilson and Professor Davis challenge the commonly held notion that all racial negativity, disagreements, and objections to policies that seek to help racial minorities stem from racial prejudice. They argue that while prejudice and racism are fundamentally rooted in American politics, so are non-racial motivations, such as a belief in a “just” world, where people get what they deserve and deserve what they get.

In their book, Davis and Wilson reveal that many white people have become racially resentful due to their perceptions that African Americans skirt the “rules of the game” and violate traditional values by taking advantage of unearned resources. It is the belief that undeserving people of color, are perceived to benefit unfairly from, and take advantage of, resources that come at the expense of white people. In this worldview, any attempt at modest change is seen as a challenge to the status quo and privilege. Resulting attempts at racial progress lead white people to respond in ways that retain their social advantage — opposing ameliorative policies, minority candidates, and other advancement on racial progress.

Because racial resentment is rooted in beliefs about justice, fairness, and deservingness, ordinary citizens, who may not harbor racist motivations, may wind up in the same political position as racists, but for different reasons.

Join Dean Wilson and Professor Davis in conversation with UC Berkeley Assistant Vice Chancellor Dan Mogulof about their research findings and why a nuanced conversation about race is critical to democracy. 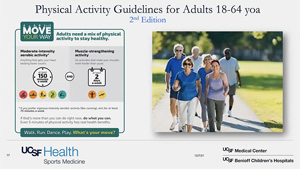 We may be living longer, but are we living healthier? As we age, proper nutrition and exercise can help us live more fulfilling lives and enjoy our extended post-retirement years. Indeed, exercise is medicine.

Cindy Chang, MD, a sports medicine physician, shares her training and expertise to provide physical activity goals and guidelines for adults. She’ll also help you determine your own activity level using the “physical activity vital sign” and why this is even more important during the COVID pandemic.

Watch Can 70 Really Be The New 50? Living Longer and Healthier with Exercise. 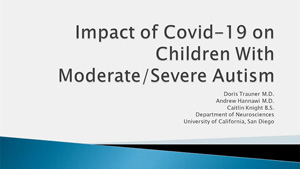 The COVID-19 pandemic has caused unprecedented changes in every aspect of our lives. For individuals with autism spectrum disorder (ASD), who often have increased behavioral symptoms with changes in routine, the pandemic has been deeply disruptive to their lives in ways that go beyond access to care.

In a compelling video from the recent Autism Tree Project Foundation Global Neuroscience Conference, Doris Trauner, MD, shares the impacts felt by both children with autism and their caregivers based on findings from studies done around the globe. She also discusses data gathered from families enrolling in a clinical trial on the use of cannabidiol to treat problem behaviors in children with severe autism. The families were asked to complete a health impact survey about how the pandemic has impacted their child’s behavior and education as well as their family dynamics. Most children were reported to have been impacted negatively overall. Dr. Trauner suggests ways we can support these children moving forward as well as some big picture lessons we can take with us into the future.

Watch Impact of COVID-19 on Children with Moderate to Severe Autism with Doris Trauner. 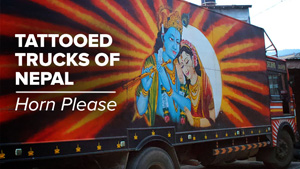 Throughout Nepal, large freight trucks painted by artists provide visual entertainment for travelers along the highways and dangerous mountain roads of the Himalayas. These trucks captivated UC San Diego Department of Theatre and Dance lecturer emeritus Ron Ranson, who taught theatre design and painting for the stage. Ranson turned his fascination with this colorful art form into the documentary “Tattooed Trucks of Nepal – Horn Please!” now playing on UCTV.

We asked Ranson to talk about his journey and inspiration to create this film.

UCTV: How did you end up in Nepal?

Ranson: I was a Peace Corps Volunteer in Nepal soon after the Peace Corps was established there in 1962. I served in Nepal from 1964-66. This post was a jungle setting with tigers, rhinos, crocodiles and other wild animals, as opposed the mountain set-tings that Nepal is more known for. I have visited there five times over those years – visiting old friends and students and doing a lot trekking with my family.

UCTV: Why did you decide to produce this documentary?

Ranson: Two of my Nepali photographer friends were out of work after the earth-quakes of 2015. I read an article in a Nepali newspaper about truck and bus painting and decided to investigate as I thought it would make an unusual and arty story. We started work in January 2017 and finished in August 2021.

UCTV: How did making this film change your understanding of Nepal and its people?

Ranson: There have been many changes to Nepali culture since I was there in 1964. I’m impressed that as the “concrete jungle” of Kathmandu pushes in on traditional icons of Nepali culture there is another way of expressing what is really important to them…images of their spiritual life, sporting heroes of Europe (!), Bob Marley (!) and traditional images of their families. Nepali are very adaptable – and this shows what they can do.

UCTV: What’s one thing you’d like viewers to take away from this story?

Ranson: The people have been kind, openhearted and generous – even when they didn’t have much to give. I would like to think I’ve given them a voice in the world to their unique art and creative expression.