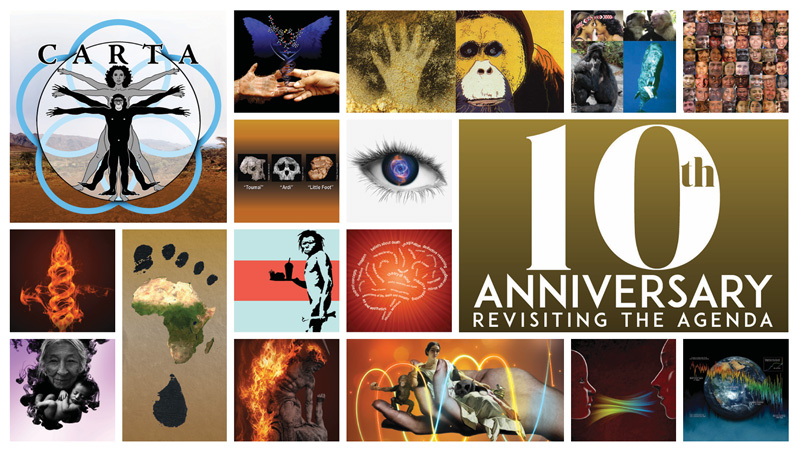 More than 20 years ago, a small group of La Jolla academics began periodic meetings for transdisciplinary discussions on explaining the origin of humans – anthropogeny – an effort which has blossomed into an international intellectual collaborative organized by UC San Diego and the Salk Institute as the Center for Academic Research and Training in Anthropogeny – CARTA.

At the formal opening of CARTA just over 10 years ago a group of CARTA leaders and advisors attempted to “define the agenda.” Since then, much additional relevant information has emerged, and an expanded group of experts now revisits the agenda by addressing the following questions on a broad array of selected topics: What do we know for certain? What do we think we know? What do we need to know? How do we proceed?

Effectively, this is a whirlwind tour of many, but not all, approaches to anthropogeny. Experts who have addressed cases of extraordinary human cognitive abilities, from memory to music to language, explore what understanding cognitive anomalies can tell us about the development and evolution of uniquely human mental characteristics. Enjoy these fascinating explorations with the series Extraordinary Variations of the Human Mind: Lessons for Anthropogeny. This series is co-sponsored by the Center for Academic Research and Training in Anthropogeny (CARTA) and the Kavli Institute for Brain and Mind (KIBM). Certain warm-blooded social animals and birds appear to react selectively and specifically to the death of other members of their group. Humans seem to be very unusual in the quality and extent of our responses – and in our ability to translate these experiences into an understanding of our personal mortality. When during childhood do these levels of understanding emerge? What is the underlying neurobiological basis for fears of death and mortality? When during human evolution did these fears emerge, and how did our ancestors tolerate them without sinking into an evolutionary dead end of depression or hopelessness? Assuming we found a solution to this dilemma, why are we still the only mammals that commit suicide? What does the archaeological, historical and cross-cultural record tell us about these matters? And what are the consequences for our current human condition, ranging from self-esteem to social organization, to political leanings? This symposium brings together expert speakers from a wide range of different disciplines that are relevant to seeking answers to these questions. In the process, we will gain a better understanding of how increasing awareness of death and personal mortality shaped the origin of humans.

The existence of Beringia had a great impact on the spread of the human species only 16,000 years ago – and not long after, climatic periods like the Medieval megadroughts extending into the second millennium moved Vikings to Greenland, vineyards to England and played a role in the collapse of the Inca and Anasazi cultures.

And all this before humans took a role in shaping climate.

Now, according to earth scientists, paleontologists, and scholars in other fields, the planet has entered a new geological phase – the Anthropocene, the age of humans. How did this transition of our species from an apelike ancestor in Africa to the current planetary force occur? What are the prospects for the future of world climate, ecosystems, and our species?

In May, CARTA (The Center for Academic Research and Training in Anthropogeny) gathered the world’s foremost earth scientists, ecologists, and paleoanthropologists to address these questions – and with mostly dreadfully sobering evidence, they place the future of the planet squarely, and irretrievably, in our hands.

Watch Human-Climate Interactions and Evolution – Past and Future.