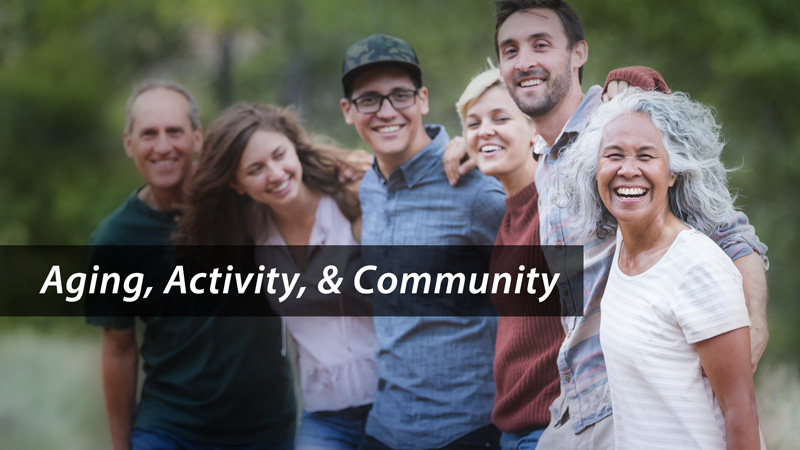 Evidence is building for the importance of physical and social activity as the way to optimize wellbeing in older age. UCSF Geriatrics faculty review their research and cutting-edge work on improving physical, social and emotional wellbeing in older adults.

Explore topics on the myths of aging, improving surgical outcomes, the science of longevity, social connection in older adults, and tools for comprehensive advance care planning.

If you are an older adult, caregiver or anyone interested in optimizing well-being as you get older, this is for you.

Browse more programs in Aging, Activity, and Community: The Science Behind Function and Social Connections in Older Age Researchers love identical twins. Because they have the same genetic code, they provide a unique opportunity to determine how environment may lead to developmental differences – i.e. nature vs. nurture.

In this new program from the Stein Institute for Research on Aging, Brinda K. Rana, PhD, shares the results of NASA’s remarkable Twins Study. In March 2015, U.S. astronaut Scott Kelly embarked on a one year mission onboard the international space station. Meanwhile, his identical twin brother, Mark, remained on Earth giving scientists an opportunity to study the long-term effects of space travel on the human body versus normal development.

Ultimately, NASA wants to know what will happen to astronauts as they inch closer to their Mission to Mars. Space is a harsh environment, both physiologically and psychologically. Astronauts must contend with microgravity, disruptions in sleep cycles, radiation, and dietary limitations, as well as confined spaces and isolation from friends and family. What will happen to astronauts after 3 years – the time it will take to get them to Mars and back again?

But these studies not only have implications for the lives of astronauts. Physiologically, space travel mimics the effects of aging on the human body, changes such as cardiovascular decline, vision problems, muscle and bone atrophy, and cognitive impairment. Any discovery that improves the lives of astronauts in space could also be used to help us right here on Earth.

Learn more about what it took to plan and execute the Twins Study, as well as some of what they’re just beginning to discover. Watch Twins in Space: The Effects of Space Travel on Humans.

Browse more programs from the Stein Institute for Research on Aging. Every discovery and invention starts with a question.

Find out how scientists dive into the big questions that drive their research in two video presentations from Lawrence Berkeley Lab’s Science at the Theater.

“Questions drive science. Questions that provoke other questions keep science fresh and alive,” explains host Jeff Miller. “In fact, if you think about the root of the word question – quest – it’s really about a journey, it’s about momentum, it’s about a zest for answers that scientists have and need to keep propelling their research forward.” In short, “The questions never stop – and neither do we.”

In this presentation, scientists explore the following questions: Is learning about dark energy going to get us anywhere? When I’m a scientist in 10 years, what will I be able to see with an electron microscope that you can’t see now? Is it possible to power all of San Francisco on ocean wave energy? Is climate change going to kill all the forests in California? What can a tabletop accelerator do that a big one, like the LHC, can’t do?

In this presentation, scientists explore the following questions: What causes age-related disease? How can we see radion and how harmful is it? Do insects contain the secrets to sustainable food and energy production? Do we need math to blow up a star? Is sustainable urban food production possible?

Browse more videos from Science at the Theater to get all the latest research from Lawrence Berkeley National Lab and explore cutting edge science with leading scientists. How do we manage our eating behaviors? What processes in the body affect how we view our relationship with food?

Watch The Science of Dieting: Why Is It Difficult for Most People, but Not Those with Anorexia Nervosa? online now.

Explore more programs in the Stein Institute for Research on Aging series. In the U.S., approximately 60% of men and 50% of women experience trauma at least once, and 7 – 8% of that population will develop Post Traumatic Stress Disorder (PTSD), according to the National Center for PTSD.

In “Post-Traumatic Stress and Growth in Older Adults,” sponsored by the Stein Institute for the Research on Aging, Dr. Steven Thorp discusses the effects of PTSD, current treatment methods, and what the future might hold for PTSD patients.

Check out the other shows about Aging and Senior Health.