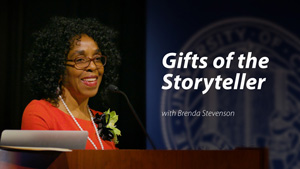 The biannual Faculty Research Lecture at UCLA has presented the work of the university’s most distinguished scholars since 1925. Its purpose is to recognize their superb achievements, and give the campus and the greater community an opportunity to gain a new perspective on scholarly achievements and the viewpoints of the faculty honored. UCLA History Professor Brenda Stevenson delivered the 127th lecture, a talk titled “The Gifts of the Storyteller.”

She talks about growing up in Virginia listening to her mother’s stories of their enslaved ancestors. As a scholar of slavery and the Antebellum South, some of our country’s most painful moments and eras, she found little documentary evidence of women’s lives. She had to become an investigator, following leads and bits of information to get to the stories told through the ages.

In this lecture she shares the stories of three women from different classes. Her careful listening over the years has unearthed fascinating stories about the women and the time in which they lived. The biannual Faculty Research Lecture at UCLA presents the work of the university’s most distinguished scholars. Its purpose is to recognize their superb achievements, and give the campus and the greater community an opportunity to gain a new perspective on scholarly achievements and the viewpoints of the faculty honored.

Enjoy these new programs from UCLA:

Dead Man Talking: Lenin’s Body and Russian Politics
“Arch Getty explores details surrounding Lenin’s body which has been on public display since shortly after his death in 1924.”

Jorge Luis Borges on War
“Efrain Kristal explores the significance of war in the writings of Jorge Luis Borges who introduced the Spanish-speaking world to German expressionist poetry and later observed the rise of Nazism.”

Oncogene, Metabolism of Development, Cancer and the Little Fruit Fly That Could
“The amazing advances made in mapping the human genome don’t alter one longstanding fact: when it comes to unlocking the scientific secrets of life, fruit flies rule.”

The first UCLA Faculty Research Lecture was presented in 1925. In 1986, the program was expanded to two lectures each year: one from the natural sciences or engineering, the other from humanities, social disciplines or creative arts.

The Faculty Research Lectures have spanned the scope of new knowledge created at UCLA, including the functions of the brain, the evolution of the earth and nature, innovations in the exploration of literature and the arts, global security, landmarks in archaeological discovery, discoveries in the molecular realm, the core of our galaxy, fundamental constructs of human morality, and the Supreme Court and constitutional law.