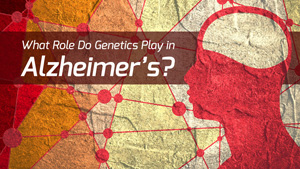 Every 65 seconds, someone in the United States develops Alzheimer’s disease. What can be done to stem the tide of this devastating disease? Researchers are looking to our genes. “One of the goals of genetics is to try and come up with as strong a set of predictors as is possible. This has influenced the way in which more recent genetic research has been done,” says Douglas R. Galasko, MD. On this episode of “On Our Mind,” Dr. Galasko shares the different types of genetic influences on people’s risk of developing Alzheimer’s disease. He explains how these genes are being studied and what being a carrier of Alzheimer’s associated genes means.

For more information on Alzheimer’s disease, visit our archive.
https://www.uctv.tv/brain/alzheimers/

Watch What Role Do Genetics Play in Alzheimer’s? – On Our Mind “Basic mechanisms in the brain have universal applications and are the road to medical discovery,” says Ralph Greenspan, PhD. He has spent his career studying how genes affect the brain and behavior of the fruit fly. This research has lead to a deeper understanding of mechanisms in the human brain. Hear about his current efforts to develop a full brain scale activity map and the technological and medical breakthroughs emerging from this work. If a neuron has sustained activity over a long period of time (visual stimulus, stress, etc.) it can change the type of neurotransmitter that it makes. This gives our neurons many languages to communicate with and makes our brain more adaptable. Nick Spitzer explains this neurotransmitter switching and how that process impacts our physical abilities, disease processes, and more.

Click here for more programs from the Brain Channel. Moving is something we do without thinking but it’s not as simple as it may seem. Movement is an incredibly complex process that requires different parts of the brain working with muscles and nerves throughout the body. Signals move between the brain and the rest of the body controlling the coordination needed — but sometimes that system breaks down.

When that communication isn’t functioning properly it is referred to as a movement disorder. These neurological syndromes often begin slowly and progress over time. Many have genetics as the common cause. Parkinson’s is perhaps the best known as it affects approximately one million Americans and in most cases is caused by genetic predisposition or exposure to certain drugs and toxins.

The Brain Channel recently completed an eight part series on movement disorders and the amazing research that is happening at UC San Diego to better understand, treat and cope with these often devastating diseases. Join Dr. Bill Mobley, Distinguished Professor and Chair of the Department of Neurosciences at UC San Diego School of Medicine, as he welcomes physicians, researchers and clinicians to discuss their work and passion for seeking discoveries to alleviate the suffering associated with these disorders.

Take a few moments to learn what these dedicated researchers are doing by clicking on the videos below.

Visit The Brain Channel to watch more programs that explore the brain. Fatta Nahab, MD, is a board-certified neurologist and director of the neuroimaging program at UC San Diego Health’s Movement Disorder Center. Find out how he is using innovative brain imaging techniques to reveal clues in understanding and developing new therapies to treat movement disorders.

He explains about “white dots” in the brain and how they are good predictors for walking problems, and not only in Parkinson’s patients. Walking is one of the most complex systems the brain controls. Many people assume as they get older they will have problems with walking due to arthritis and other factors associated with aging, but that’s not exactly what he found. The brain plays a significant role in walking problems, more so than sore knees.

Medicine is at an exciting time and Dr. Nahab is inspired by his patients to translate research into the clinic, the clinic into research and to bridge the technology gap between medicine and the tech industry

Watch Brain Imaging and Understanding the Pathogenesis of Movement Disorders with Fatta Nahab.