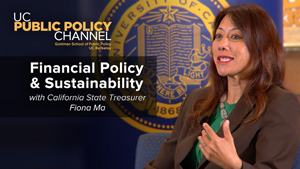 California is the worlds fifth-largest economy. That makes State Treasurer Fiona Ma’s job quite complex. Her office handles everything from financing housing development to collecting cannabis sales tax. Recently, she sat down with Henry Brady, dean of the Goldman School of Public Policy at UC Berkeley, to discuss the financial challenges the state is facing.

Two of the biggest issues Ma is working on are inextricably intertwined: housing and transportation. As the state’s population grows, limited housing supplies are becoming more and more expensive, forcing workers farther from city centers, and snarling commutes. One of the potential solutions she suggests is public-private partnerships, like the Virgin Trains project that will eventually connect Los Angeles and Las Vegas.

During their conversation, Ma touches on a number of other issues impacting Californians. She covers a new law that will ensure local governments get sales tax from Amazon, the growing need for senior housing, a plan to help city governments stay on top of their finances, California’s controversial proposition 13, and much more. 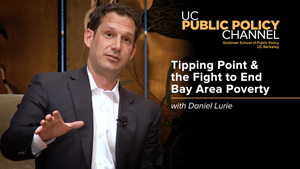 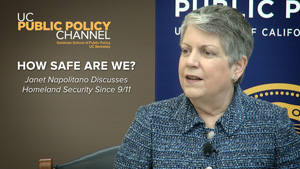 A lot has changed since the attacks of September 11, 2001. The Department of Homeland Security was created to safeguard the country against terrorism and other threats. As the former head of the agency, Janet Napolitano says we are now safer in many ways. She says it would be nearly impossible for someone to orchestrate another 9/11 style attack using planes as weapons. But, there are other threats to the homeland today, some of which are not getting the attention she believes they deserve.

In a recent talk at UC Berkeley’s Goldman School of Public Policy, Napolitano spoke about her time at DHS, and her new book, “How Safe Are We?: Homeland Security Since 9/11.” She says there are three main risks to the safety of Americans: climate change, cyber-attacks, and gun violence. Napolitano says while climate change might not seem like a priority for DHS, it is increasing threats from deadly storms, drought, wildfires and rising sea levels in the US. And, it’s contributing to drought and devastation around the world which can create environments where extremism can take hold.

Napolitano says while there are several serious threats that need to be addressed, the main focus of the current administration – the southern border – is not one of them. As the former governor of Arizona, Napolitano is well-versed in border issues. She agrees that there are problems that need to be addressed, but disagrees with the methods President Trump has proposed. She advocates for increasing technology between ports of entry, and beefing up security at the ports to combat human and drug trafficking. As for the increase of migrants coming from Central America, Napolitano says it’s a crisis we can get through, but not something we can stop with the harsh treatment of asylum-seekers. She points to Colombia as an example of how the US can help restore public institutions in countries like Honduras and El Salvador, and remove the motivation for people to flee.

After her talk, Napolitano takes questions from students and moderator Orville Thomas on everything from how social media companies can combat hate speech, to whether President Trump has reached out for advice.

Watch — How Safe Are We? Janet Napolitano Discusses Homeland Security Since 9/11 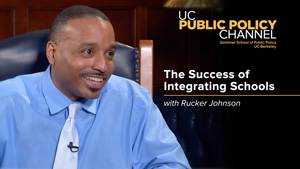