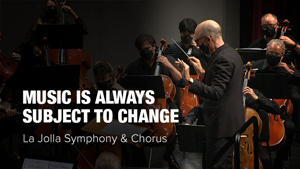 Rooted in San Diego for over 60 years, the La Jolla Symphony & Chorus presents concerts of ground-breaking, traditional and contemporary classical music. UCTV has had the privilege of partnering with LJS&C for over twenty-five years.

While we had hoped to record the first concert of the new season at UC San Diego’s Mandeville Auditorium with an audience, the revised opening concert gathered as many of the players of the full orchestra as possible, in a safe environment for indoor performance. The result is this virtual concert that transforms the traditional orchestra to feature small ensembles highlighting the core of talented musicians.

This concert is in three sections, representing the various orchestral instrument families – brass, winds, and strings.

Watch this presentation of Music is Always Subject to Change by the La Jolla Symphony and Chorus. 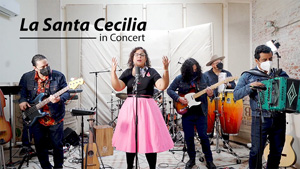 They are dedicated to voicing the experience of a new bicultural generation in the United States, fully immersed in modern music, but still close to its Latin American influences and Mexican heritage.

Their music is rooted in their Mexican heritage, but also inspired by traditions of bossa nova, rumba, bolero, tango, jazz, rock, and klezmer.

They have made seven albums, and their 2013 release Treinta Días won the Grammy for Best Latin Rock Album (Alternative or Urban). They have also been nominated for two Latin Grammies, and their album El Valor was named one of the best of the year by NPR’s Alt Latino. 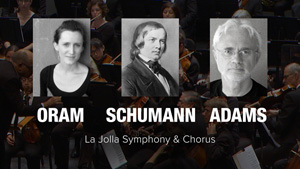 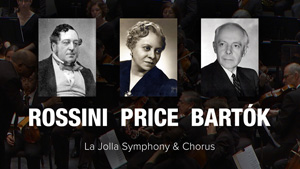 La Jolla Symphony and Chorus is known for mixing favorites from the standard repertoire with the new, the unfamiliar, and the undeservedly overlooked. The November 2019 concert, the first of the 2019/2020 season, continues this tradition with works by Giaochino Rossini, Florence Price, and Bela Bartok.

Rossini’s Overture to William Tell (1829) is familiar to audience members of a certain age through its association with The Lone Ranger radio and TV series (“Return with us now to those thrilling days of yesteryear…”). Written for Rossini’s final opera, Guillaume Tell, the piece is essentially an instrumental suite in four parts. The last of these, marked Allegro vivace, is the most familiar section, and was written seven years earlier as a march for a military band. It’s the only part of the Overture (and its parent opera, rarely performed today) known to many people outside opera circles. Perpetual-motion violins, inspired brass and insistent percussion power this music to a galloping conclusion.

Florence Price’s Symphony No. 1 (1932) was the first work by an African-American woman to be performed by a major American symphony orchestra. It was a singular achievement that should have secured Price’s place in modern musical history, yet her work came perilously close to being forgotten altogether. We can thank the 2009 chance discovery in a ramshackle house of several Price scores previously thought lost that led to renewed interest in her work. Among the manuscripts were two violin concertos: Violin Concerto No.2, performed by La Jolla Symphony last season, and the First Violin Concerto, written in 1939 (exactly 70 years before its re-discovery) and presented in this program. This concerto is lyrical and traditional in form, with beautiful writing for both soloist and orchestra. Indeed, Price’s devotion to the traditional idiom may have contributed to her obscurity in an era that scorned such “old-fashioned” music. Hopefully, our contemporary eras renewed appreciation of those traditional forms bodes well for the music of Florence Price to at last find its audience.

The concert concludes with Bela Bartok’s Concerto for Orchestra (1943). The words “difficult,” “challenging,” and “uncompromising” are often applied to Bartok’s music, but not so this piece. The Concerto is a perennial favorite with conductors and audiences alike, and it’s easy to see why. The five movements move through a surprisingly broad range of emotions, from brooding to philosophical to playful to a final exultant rush of energy, with humorous moments yes, humor in Bartok – verging on the parodic. Bartok was terminally ill with leukemia during the Concerto’s composition, but he nevertheless referred to it as a “life assertion.” It is indeed that, and the final expression of an indomitable creative spirit. 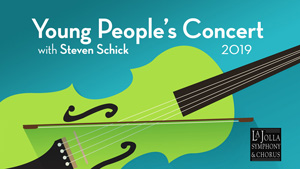 La Jolla Symphony & Chorus kicks off its 2019/2020 season in traditional fashion with the annual Young People’s Concert. Conductor Steven Schick notes that this free concert is one means for the Symphony to give back to the community, with the added goal of encouraging an interest in music among children (and perhaps their parents, as well).

Steven Schick serves as host and narrator, guiding the audience through excerpts from Béla Bartók’s Concerto for Orchestra and Florence Price’s Violin Concerto No.1 as well as the complete William Tell Overture by Rossini. Schick places particular emphasis on the orchestra’s organization and how the various sections interact with each other, with each of the musical selections serving as examples – duets in Bartók, the solo violinist in Price, and the four brief but distinctive movements of the Rossini, including the famous finale (aptly described as a “gallop”). Schick also solicits questions from his young audience, the topics ranging from “How many strings does a harp have?” and “What is the loudest instrument?” to “What sparked your [Schick’s] interest in music?” Following this introductory presentation, the three selections are performed in the first regular concert of the season, giving students and parents the opportunity to hear the pieces in their entirety.

In his concert program notes Steven Schick says this about the “uses of music:”

“The usefulness of music gets at its true power: the ability to shape our lives and, in small and large ways, to connect to other people’s lives…Music can be used as a cultural adhesive, binding our experiences one to the other.”

The Young People’s Concert and other classical music performances can be a valuable tool in helping children to begin forming their own tapestries of cultural memories and shared experiences.