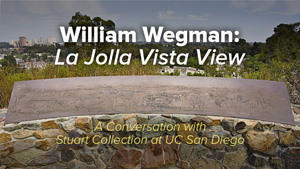 In the early 1970s a young Los Angeles-based artist named William Wegman brought home the first of what would be many Weimaraners and named him Man Ray, after the Surrealist artist and filmmaker who was one of his formative influences. Wegman considered his dog a companion, but Man Ray aspired to be more. Wegman, an accomplished photographer, soon discovered that Man Ray loved to work in front of the camera, donning outfits and striking poses like he was to the manor born. The photos that resulted could be viewed as charming and eccentric curios built around Man Ray’s straight-faced presence, or as sardonic commentary on the art world and its preoccupations, fashion, fame, etc. Man Ray was soon joined by the near-legendary Fay Ray and later by assorted puppies. His work with Weimaraner supermodels changed his life: it made him famous, it remains his most popular artworks, and following relocation to New York that work continues with his current canine muses Topper and Flo.

Though inarguably best known to the general public for his dogs’ portraits, Wegman is also an established and widely-exhibited painter, filmmaker, and creator of art installations. The installations began with La Jolla Vista View, commissioned by the Stuart Collection at UC San Diego. The piece is set at the edge of the campus overlooking the bustling I-5 freeway and “greater La Jolla,” and consists of a large etched brass plaque atop a stone base with a telescope close at hand. The etching depicts the scene as it looked in 1984, very different than today’s view, and the telescope is the type often found at scenic overlooks (but free to use). Though not originally intended as a parody of said overlooks, Wegman notes that “it more or less evolved – or de-evolved – into that.” The title La Jolla Vista View is itself a gentle send-up since “vista” and view” mean precisely the same thing. Whatever the satirical intent (or lack thereof) informing the project, it has become a popular meeting spot for students and staff working in the campus Theatre District; Wegman says he’s happy to “settle for that” as a response to the installation. The salient point is that, like most of Wegman’s work, the piece offers layers of meaning if the visitor is open to them.

On a personal note, I had the great pleasure of interviewing Bill Wegman in his Chelsea (NYC) studio in 2015 and meeting his family and Weimaraner brood. I’d been a fan of his work for many years and naturally had some trepidation about meeting him, since in my line of work meeting someone you admire can and often does end awkwardly if not badly. Thankfully, not the case in this instance; the Wegman family were warm and gracious, and as expected Bill has a wonderful sense of humor. I mention this because I believe these qualities and his successful integration of family and work infuse his art. Believe it or not, this is not true of every artist.